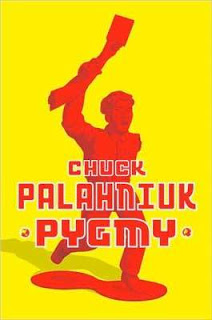 What's the story? The diminutive 13-year-old agent of a totalitarian homeland is sent to the United States to enact Operation Havoc, the sole aim of which is to destabilise the most powerful country in the world. Along with his fellow operatives, he masquerades as a foreign exchange student and moves in with a typical nuclear family, learning more about American life as he goes. Trying not to be seduced by the lifestyle he abhors, Agent 67 (nicknamed Pygmy) dispatches reports back to his homeland and begins to plan something terrible.

How does it read? From the outset, I should say that Palahniuk employs broken "Engrish" throughout the novel to reflect Pygmy's speech. It's a clever technique that might take some getting used to- I read the book a chapter (or "dispatch") at a time for a few days before devouring the rest in two sittings. As for the rest, all the hallmarks of Palahniuk's writing are there- the man is unflinchingly blunt in his writing. I'm sure he's a well-rounded human being so I can't suggest he thinks nothing of the anal rape of a middle-school bully by our hero as he chants Communist mantras. Somehow Palahniuk's writing has always been able to get under the skin of his readers, providing a remarkably visceral and cerebral reading experience every time you pick up one of his books- I'm thinking of course of the famously faint-inducing "Guts" in his short story anthology, Haunted.

The story zips along once you adjust to reading Pygmy's brand of Engrish, but you may come to realise that while the central concept is more or less unique, there are more than a couple of undercurrents that echo Palahniuk's most successful work, Fight Club. The attitudes to consumerism continue, but here it's specifically focused on the land of the free and the home of the brave. I'm actually wondering how this has fared in America, because even though Pygmy's opinions on the States are inflated and distorted by his totalitarian origins for comedy effect, the book is fairly anti-American. It centres around a terrorist as a protagonist and throws out harrowing statistics about 5% of the world's population (Americans) consuming 75% of the world's wealth. Quotes from political and historical figures are employed to great effect, and I was amused to see those attributed Adolf Hitler crediting him as a "renowned huckster", but they're there to move the plot forward as well as amuse, a balancing act that Palahniuk achieves well.

Pygmy isn't Chuck Palahniuk's best work. Nonetheless, it's definitely an enjoyable read, if a little difficult to decipher at first. Nevertheless, Palahniuk continues to prove himself to be a master of the craft, and I eagerly look forward to his next works.

Blue Moon said…
Hi! Arjun,
I visited your blog for the first time. The beginning of the post was a bit confounding but as I read forward, I started understanding what have you written. I enjoyed reading it.
Well Done………
Do visit My blog…………
Good luck for next posts………….

I’ll be eagerly waiting for your comments on my posts.

DDWWeb said…
So interesting blog i ever see
if friendly,pls follow me at

IEDig said…
IEDig is a social content website where your readers or you can
submit content to. If you have a good story, members will 'Vote
This' the post and write comments. As a blog owner,you may want
to make it easy for and encourage your readers to submit and Vote your articles.

Elise said…
Hello ! Lovely post - thank you for sharing it. I really enjoyed looking through your site today - best wishes and lovely to meet you !
September 10, 2009 at 3:48 PM