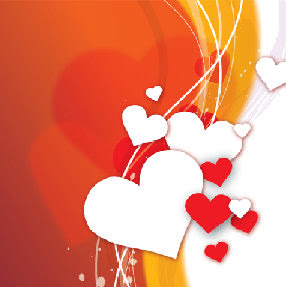 Well, I was waiting for my wife to come back from office and I am still waiting. She is yet to leave from office. And then I thought of writing something – I have not written for a long time. And I wrote a small poem – Valentine in Love. Yes – I am waiting for my Valentine to come back home. Tomorrow is Valentine’s Day and it will be our 4th V’day together. 4th in 12 years of love in 28 years of life – little too less, I know. But think of it – from now on, it will just increase and will keep on increasing!

Saint Valentine’s Day all over the world is celebrated as a day of love. For young lovers around the world, this is like independence day (lol) or may be Christmas or may be Eid! And in our India? We have Pramod Muthalik and a few similar lead astray minds, who have converted this day into a scary day. People are scared to go out on this day – be a married couple or one in love – even a brother thinks twice before picking his sister from school, in fear that these molesters may intervene and assault them on road. How pathetic is that? I remember the case last year – in Mangalore. I saw the scenes on TV how these filthy ‘dead’ people beat those teen girls. I have never seen any girl getting thrashed like that – that too, a gang of those hooligans attacked a handful of girls in a pub. The government did not do anything – nothing that could bring these people on ground and teach them a lesson. Neither the effort from the mass could do anything measurable. The Pink Chaddi Campaign did not help, it seems. This year again, these good for nothing gundas have stood up saying they would boycott the celebration. At times I think who would take care of us? The army is busy standing on the border, shivering in cold nights and waiting for the foreign foes to attack us. What will happen to the enemy we have inside the country? Who will take care of these heartless nincompoops? No, the government will do nothing for us – it has never done, and it will not do anything, apart from saying in a press conference that strict action will be taken, only after there is a massacre – so, wait and let that happen first…

Well, this post is not only anti-Muthalik or his terror group called Sri Ram Sena, I just wanted to 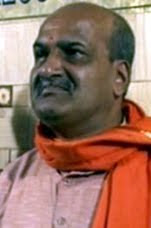 write about this thought that came to my mind when I saw a few common men being brave and abuse that fanatic in public. A couple of days ago, while Muthalik was chipped in an interactive session on Valentine’s Day celebrations organized by some Kannada TV channel, a few valiant ‘common men’ took pen ink and blackened his entire face, right beneath the nose of his Sena and police stranded for his security. I am happy that the crowd present there and the policemen did not try to capture any of those brave hearts. I loved his face, for once. And I really appreciate the people who did that – from the bottom of my heart.

Go on people. Go out with your Valentines and prove that love still exists and will continue to exist and will not be deterred by this toads in the well. And I wish to get some severe punishment to these extremists. If we can fight the Maoists and the LTTE so wide and open, we can easily throw these gangsters out of our society. The other groups that I mentioned had a thought in their uprising. That could have been correct too – but I have never read about those philosophies and hence, I am in no position to comment on them. But I know what Muthalik in Karnataka, Shiv Sena in Maharashtra and similar groups in other parts of the country are doing is wrong. Let us come together to fight these too. Why would the government protect them, while the police should protect us from these pests of the society? Let the names ‘Muthalik’, ‘Thakrey’ be an abuse. Let it be a curse and let every mother in India come up and say, ‘I would rather be barren, than having a son like this filthy fellow and all those who support him.’ Only then, when we would resolve our own issues inside our own country we will be able to develop and fight foreign invasions. We need to clean and sterilize our home, before trying to do that to our neighbors.
Phew! Chuk it!

BK Chowla, said…
Happy valentines day.
Yes,these goons can be fought.But, those who are expected to take care are the ones who protect these goons---then what does one do??
February 14, 2010 at 5:36 PM

scorpiogenius said…
The youth won't fall into the trap of such illicit morons like Muthalik if the state could provide roti, kapda, makaan for everyone. Well that's something we can't treat all of a sudden. But shock treatments like this need to be given in a regular dosage to these Muthaliks :)
February 14, 2010 at 7:29 PM

Tan said…
Yes - an absence of occupancy in the minds may lead to follow such thoughts... Education, can also be added to your list of R, K, M...