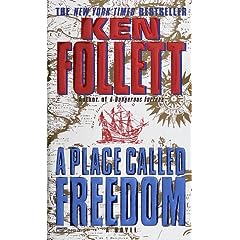 
After staring around this computer for past one hour, doing nothing, i decided to do something which should have been done with more spare time in hand.I opened up that huge box, where the better part of books collection is kept.I fished out a very great book to write about. Its titled "A place called freedom" and written by best selling author ken Follett. When i had bought this book, i had just bought it, it didn't cost me much, and after reading so many books, now it doesn't matter much which book or author i read.It was 13th January, lohri.this year .i bought this book, a 1996 imprint i guess.

Age Factor- 16 and above [If you wait till 18 its better, but if you are mature enough to read a bit emotionally disturbing sequences go for it]

The book
I haven't read such stirring and a unique story ever before.So for me the experience was wonderful.This was the first book, i read written by ken, so i had no perceived expectations from the author.But he wrote such a though provoking story of a boy,mach, enslaved in coal mines.He wishes to escape to lands unknown, and the female protagonist, Lizzie who is herself in a fixed situation, finds a common chord between mach and herself.This book has,romance,thrill,adventure,politics,slavery and even the living conditions of people years ago has been highlighted well. After reading this book, i was moved, both intellectually as well as emotionally.I write here an example, a very small little one.There is this girl mach likes.She wears an underwear only on sundays.[i write it here because in the story this fact is highlighted]
Now when i read it, the girl is so poor that she has the luxury of an underwear only on sundays,
I was like OMG!!!then again it was mentioned, again it was like OMG!! but later i reflected its just an underwear, there will be lakhs of girls around the world, who don't afford a small undergarment.We talk about so many advancements that human race has made.These little things, provokes you to think back.
Like i wrote before, i have read uncountable number of books in my short life, but only few could hit so hard as this one did.
What is freedom?Now i reflect.What's the price one pays for his/her freedom?I think.
If you can lay your hands on this masterpiece by Ken Follett,do read it,although its a bit thick for not so voracious readers.[450 pages]. A book,every living soul should read in his/her lifetime.

Gifting Ideas
I got no idea,how much it will cost, around 300 rupees is my guess.Since i recommend that everyone once should read it,once,so its a good gift.Especially for those of your friends or family who are fond of collecting books.Those fond of history of America or The united Kingdom
should also like this gift.

A thought to share
Books are the quietest and most constant of friends; they are the most accessible and wisest of counselors, and the most patient of teachers. Charles W. Eliot