Artemis Fowl and the Time Paradox 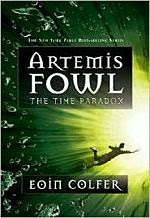 Released on 6th August, this is the sixth and the latest in the Artemis Fowl series by the Irish author Eoin (pronounced as ‘Owen’) Colfer. Artemis Fowl is an extremely bright child with criminal intentions, who takes his father’s place as a criminal mastermind after he goes missing. Artemis goes through a series of adventures, and in the process finds friends in the Underworld magical creatures, even though initially it was his trickery that made the normally reclusive creatures come out in front of ‘Mud Men’ such as Artemis.The much awaited The Time Paradox picks up from where The Lost Colony left off.

Artemis, after his time travel, is of fourteen years of age, when he should be actually seventeen. Artemis’ mother is dying and to cure her, he decides to take help from his fairy friends, but he realises that the cure to his mother’s disease lies not in the present, but in his own past. The plot revolves around Artemis Fowl and his fairy friend Holly Short, who together set out on a time travel, to secure the key to the cure by defeating the younger Artemis. But they end up meeting and fighting an old, or rather old in the present and new in the past, enemy.The book is as engrossing as all his previous ones and Eoin does a terrific job with the book. This is the most intense book so far in the series.
But one thing that we would’ve loved to have seen more of is Butler, Artemis’ full-time bodyguard. Mulch Diggums is as sti(n)cky as ever, and Foaly, the brainy centaur is as bright as ever. But we miss Foaly for a large part of the story. It is Artemis and Holly who are on their own, with nobody but Mulch Diggums to help them.It is dangerous, yet engrossing; fantastic, yet gripping. On the whole, it is a must read for all sci-fi fans, though I feel it would be better to start right from the beginning of the series.
Labels: Books

Tshhar Mangal said…
I have heard about Artemis fowl,here and there but never ever read it.
Seems that it is some very popular series of books
September 28, 2008 at 11:12 AM

Akansha Agrawal said…
@tshhar
Yeah it's pretty popular, especially among those who like to read sci-fi books.If you are interested in reading them, you can take them from me or scourge online. Try esnips.com
September 28, 2008 at 12:36 PM

Akansha Agrawal said…
@alexis n roxy
Thanks and Best of Luck for your exams, mine are just round the corner!
September 29, 2008 at 4:50 PM