Is this end of an era? 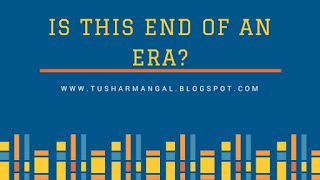 If you look at the M & A activity in the past few months, it seems like an era of independent free internet is slowly coming to an end.

Linked In was bought in by Microsoft, Yahoo an iconic brand of the nineties was sold out to Verizon and Monster another survivor of the dot com bust of nineties finally went to hammer. It seems as if the surviving spirit of these and many like them is waning. Look at how Uber, although now a major player but once a struggling start up, conceded defeat in China as players with deep pockets closed ranks to check it in.

Indeed it seems as happens in a true capitalist world, the big boys with deep pockets and perpetual line of credit seems to be showing who the boss is, with curbs on smaller different players. Take the case of Go Javas, a logistics firm, which was supposed to be bought by Snapdeal but once talks failed, again supposedly Go Javas lost the e-commerce giant's account.

So, where does future lie for upcoming tech firms? Most of the innovative start ups in a similar space have one thing in common. Their investors are almost all the same. In this game, it seems they have been risking their freedom and their enterprise as others sit back to pounce at the opportune moment to buy it all in.
Labels: Finbus