Why you should pick a job for the right Work Culture 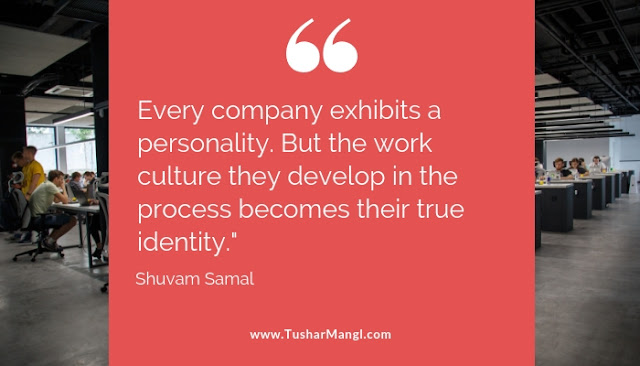 The other day, I read these lines by Shuvam, about how work culture transforms into a company's true identity. It resonated with what I have been saying for a long time now. People pick up jobs for all the wrong reasons whereas they should first look at a company's culture.

I recall a few months, someone came to me for a career related advise. The said person had a job offer in hand and wanted to switch. Now if you have been doing this for long, that is handing out advise on any matter whatsoever, you already know the drill. The guy will ramble a little about how its the end of the road at the current organization, then go on about the offer in hand, and subsequently lay down the fears. Mostly, its about validation. Most of the times, the person has already made up his/her mind. They will tell you about the benefits, the timings, the hike etc.

But what I would prefer to know is about the company and its culture. The kind of ethos imbibed within the company's roots should be the ultimate factor to decide whether to work there or not. And culture is not just about less work hours or a party every weekend. Its also not only about fancy interiors and those multicolored furniture pieces. The culture of an organization is much more than that. Ethics, justice, fairness, treatment of employees, are some other factors.

I hear so much about how much companies care for their employees, it makes you want to gag. Most of that stuff is fancy PR spun around by people with great skill set. But its a done to death thing. Especially in India. Its rare in our country to find a company which seriously thinks about the company and its work force. Most of them are their to exist. And just to exist.

Employees then, have no great motivation to work than to wait for the next best offer an jump ship. Not even knowing what the company's culture was and what next company's could be.

A friend recently changed job, and at his farewell, someone remarked something about their P&L head. This friend was a middle manager ranked guy. Not too senior, not too junior. He had never heard or known about the name of the P&L head. Simply because the P&L head didn't care, neither did the company had a culture of inclusiveness. And the friend went with a rival organization at a much senior position. Looks like he didn't have to care either.

Individuals if they land at great cultures will do real great not just in the short term, but in long term as well. For they will bloom their, not just grow. Companies which fail to understand what culture is, ultimately bleed money on attrition, and fancy business plans with shoddy talent and an utter lack of vision.

People need great work cultures to do a great job and companies should invest their energies to perfect a work culture which attracts the best minds.

Do you agree with this? Let me know your thoughts in the comments section below.