Last week, I shared a list of books I would strongly recommend you to read this summer. I purposefully, made two lists, one for the non fiction genre, and another for fiction. This is to give you the choice as per your chosen form of reading.

So what should you be reading from the fiction bookshelves this summer? Here are a few books I say you must read. 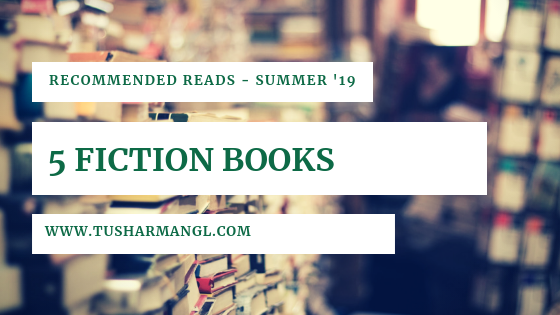 This is a profound story of a town obsessed with hockey. Fredrik Backman is an exceptionally talented storyteller and he puts his skills well to sketch detailed characters and narrate emotions. Beartown is a town possessed to win. Win at any cost for at sake is survival of the town.

You don't have to be a hockey fan or an enthusiast to relate with this story following a town ice hockey team. This is the story of friendship, betrayal, community and the meaning of life.

Be prepared for a heavy read when you pick up this book. If you love it, you can pick up the sequel too. Its titled Us Against You.

The story of young August Pullman is a recommended read for people of all ages. Born with deformities, his unusual face grabs lot of attention from his new school mates. What I liked the most about this book was how it deals with subjects like compassion and acceptance. As we read through the story narrated from different people's point of view, it manages to strike a chord with the heart and the soul. This book was first published in 2012.

Listed among the Best Books of 2017 by Goodreads, Without Merit is a book to read in the comfort of your reading nook. Especially if you like to read late nights. We are introduced in this book to the Voss Family, who live in a former Church. The story of Merit Voss and the way she holds on to her life and deals with the family drama has been told with perfection. The narrative is so powerful that it makes the story most unique. The characters are interesting too, a mother who lives in the basement, a step mother who used to be the nurse of the mother. Siblings and half-brothers. Complete family drama and then their is the love.

4.The General's Daughter by Nelson DeMille

Some books are just meant to shake your soul and this is one of them. This crime fiction was first published in 1992 and a movie on the same starring John Travolta was released in 1999. Epic movie and an epic read, this follows the trail of Paul Brenner who is out investigating the mysterious death of Captain Ann Campbell, a rising star in the Army.


Adding to the twist is the fact that Campbell's father is a renowned General and the way the rigid Army structure looks upon its women.

Counted among the best literary minds of our times, Green and Levithan team up on this book to craft an unputtable read. The fact that two characters blend up two characters into a single book, makes it for a unique read.
At the crossroads of life, to teenage boys come across each other. Both are named Will Grayson and this book traces their life , their relationship with Tim Cooper and the vagaries of growing up.

Well, apart from the above mentioned books, with full bias, would also recommend you to read Six Degrees. Being part of this book, has been one of the momentous journeys for me as an author. In September 2014, BlogAdda ran a #CelebrateBlogging initiative and the top 3 stories were featured in this book. I was lucky to be part of the team Potliwale Baba, whose story was selected to be added to this book.

So what are you planning to read this summer? Share your thoughts and ideas for summer reading and opinions on the books mentioned above.

Preeti Chauhan said…
I have added The General's daughter to my reading list .I was lucky to get my hand son six degrees , such an engaging read !
June 9, 2019 at 11:28 AM