ENSURING EMPLOYMENT FOR A 600 MILLION Workforce

With the workforce estimated to reach 600 million by 2022 as per the NSDC EY report on “Future of Jobs in India”, most job portals existing today, will be able to cater to only 20% of this population which accounts for the White-collar workforce. In a country dominated by informal workforce, job portals have evolved only for the white-collar workforce and the disparity among White, Blue, and Grey collared jobs is staggering and quite highly unresolved. The job engagement for White Collared workforce has been digitalized rapidly in the last 2 decades. Low cost smartphone revolution and wide network connectivity have made it easier to bridge the gap between opportunities and job seekers.

Pursuant to a 2012 report of the Committee on Unorganised Sector Statistics, National Statistical Commission, the unorganized or the informal sector account for more than 90 percent of the workforce in the country and almost 50 percent of the national income evolves from this sector. Not much has changed since then. As per the International Labour Organisation report of 2018, the informal sector jobs accounted for 81% of all employed persons in India.

The biggest issue faced by the informal job market is the lack of structured job information that could be easily accessible. Both jobseekers and employers are unaware of where one can find suitable opportunities nearby whilst the other struggles to find suitable candidates near the workplace. Both stakeholders rely heavily on references and contractors to fulfill their requirements, which is followed by a very time consuming &amp; expensive process,resulting in business losses to employers &amp; idle months without a job or accepting unfavourable job roles by the job seekers. 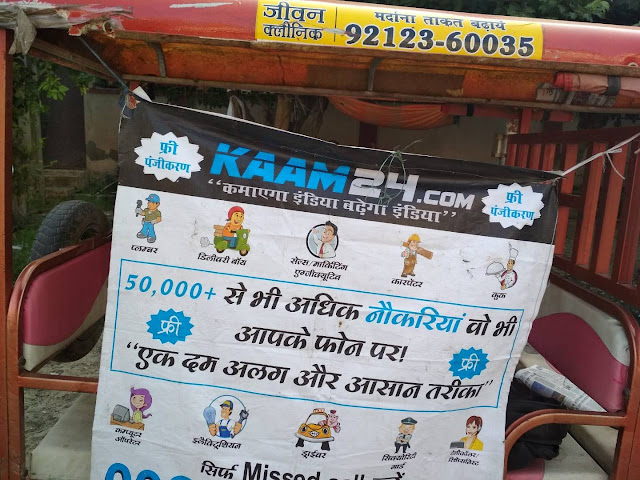 Finding the right job near you is easier than ever due to formal platforms for the informal workforce. Sushant Shekhar, Co-founder of Kaam24 says, “Prior to networks like Jio and low- cost smartphones came to the picture, we helped jobseekers digitize their profile by using ground-level strategies like sidewalk posters to rikshaw announcement, field agents, auto-rickshaw/ e-rickshaw branding and advertisements in Ramleela, to name a few. We have left no stone unturned to tap into the right audience. We have managed to get even 60- year-old job-seekers hired while doing a hiring campaign for electricians and plumbers for Hyper Local service providers, and were able to provide predictable incomes, social security and healthcare benefits to thousands of informal workers.”

Staffing companies such as Team Lease, Quess Corp, Addeco do cater to some Blue and Grey collared jobs, but even there, the focus is from the perspective of the big companies looking to hire staff, often in bulk. And MSMEs who recruit a major chunk of this class of job- seekers in India are left with no option except the traditional mode of hiring. To cater to such MSMEs, portals such as Kaam24, Work India, Quikr Jobs have started to reengineer this job market.

Unless reinventing steps are taken, the gap between Blue/Grey collared workforce and MSMEs will keep widening. It is an opportunity waiting for people to explore it.

Mayank Bansal, Co-founder of Kaam24 who looks into job seeker onboarding says that he could see the impact that their startup can possibly have on the livelihood of millions. He says, “On one of our job seeker onboarding sessions, we were conducting rikshaw announcements and handing out flyers when kids came and asked us what the announcements were for? We explained to him that if he knew anyone was on the lookout for a job, they could give us a missed call to download our app and apply for jobs without paying anything, he ran to his house continuously exclaiming “Mere PAPA ko fir se job mil jayegi”.

With over a million job seeker profiles digitized, Kaam24 is working its way up the ladder to reach digitize over 100 million jobseeker profiles over the course of next few years, while playing with latest technologies like Chatbots and AI to formalize the informal workforce in India. With numbers as high as 600 million, the scope of growth for this sector is yet untapped and requires not just in depth reach and spread, but also intensive costs.
Labels: Press Release