A Book Review: Cheaper by the Dozen 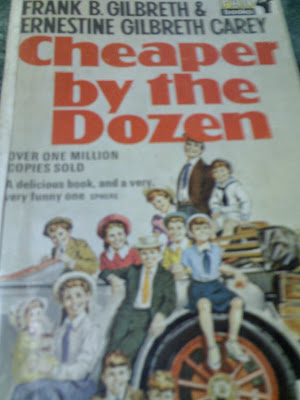 Reading was a habit inculcated in me from a very young age. Not only were my parents encouraging, but my sister was an avid reader herself, and she introduced me to some of the most wonderful books. On my 14th birthday, she gave me a book called Cheaper by the Dozen. It had a picture of some kids in a buggy on the front, and the following summary on the back :

'The reason why Dad had so many children - there were twelve of them - was that he was convinced anything he and Mother teamed up on was sure to be a success...'

I took it up the next day, and was hooked in under five minutes. Since then, I have read this book countless times. And even though I know the entire narrative now, I still split my sides at the outrageously funny incidents outlined here.

Dad, Frank Bunker Gilbreth and Mother, Lillian Moller Gilbreth raised twelve children over seventeen years before Dad passed away in 1924. Both Dad and Mother were pioneers of time and motion study, and they believed that any process that works in a factory should work in the house and vice-versa.The Gilbreth home was a picture of efficiency and regimentation, with charts to monitor brushing of teeth, taking baths, height, weight and with each older child being in charge of a younger child. Dad was a born teacher, and the book tells us of many of his innovative and interesting teaching techniques. Dad would frequently use the line: 'Do my Irishmen come cheaper by the dozen?' (Hence the Title). Dad had the knack of looking at a person and guessing his nationality. He would then substitute the appropriate nationality into his question.
Each incident brings to light new sides of Dad and Mother. Dad was the planner, the motion-study expert, and Mother was the psychologist, the one who settled all the fights. Dad was a natural teacher and Mother was a natural story teller. The book is dedicated:

Cheaper by the Dozen is an enchanting window into childhood, a story of order in terrific chaos, often transporting us back to our own childhood, and often making us wish that we too were a part of this big rambling family. Personally, this is easily among the Top 5 books I have ever read. I find myself laughing along with it, and a feeling on contentment steals over me. I strongly recommend this book to all book-lovers, to all parents, and to anyone who wants a good laugh and some cheering up! Cheaper by the Dozen was followed up by 'Belles on Their Toes', which continued the Gilbreth family saga. This is what I'm gifting myself on my birthday this year. So many years after I first read Cheaper by the Dozen, I'm eagerly awaiting another round of Gilbreth family fun!
Labels: Books

shrutiwrites said…
I've read Cheaper by the Dozen and I fully agree with the feedback of the book given here. I enjoyed reading the book a lot and asked my younger sis also to read as she is not much into reading and belongs to the lot which gives a nasty look as soon as they hear the word 'novel'. But this book had the power to keep her hooked to itself and she had got too much involved in the book that when Dad dies, she had tears in her eyes!!
October 11, 2008 at 5:27 PM