The World is Flat 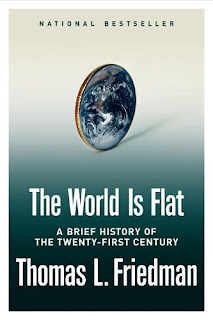 The World is Flat by Thomas Friedman is one of the books that are intended to describe exactly how deeply globalization runs. I finished this book a few weeks back but before shooting off a review, I wanted to wait and watch the latest impact, namely the financial crisis that is trickling down from the US to India and will soon assume the form of a gushing stream before the holes can be checked. Confused? Well, read on.
The author has done extensive research and has based the book on the situation around 2004-05(of course, that was the present then) when the Indian IT sector was going boom boom and the Indian markets were singing Kadam Kadam Badaye jaa and even people who had never invested in stocks all their life were religiously following CNBC and Zee Business and Stock Today and so on and so forth…
The book has been divided into three sections, first where Thomas explains how the world got flat, second where he talks about US and the flat world and third where he talks about the developing countries and the flat world. The author quotes Nilekan, CEO, Infosys as saying ‘The playing field is being levelled’, meaning the world is a completely flat place, thanks to the internet and the connectivity it has provided India with. Thomas talks about all the outsourcing of jobs that have been given to the Indians, primarily IT jobs and mostly for the computer engineers, working at salaries that can be called meagre compared to what the US engineers demand. It initially started with the Y2K movement when all computers had to be reset to accept dates from the twenty first century because they were not originally built to accept those. India with its sheer ready work force at low costs and high connectivity bagged the opportunity. The offshoring movement led to a similar prosperity in China when big US companies looking to cut costs shifted factories, workhouses and manufacturing units to China.
Thomas talks about the success achieved by some of the companies like Wal-Mart, FedEx UPS, Google and TiVo and the role played by the flat world behind their achievements. The way Wal Mart succeeds in providing low cost, high quality products would’ve been absolutely impossible in a world not so flat.
Thomas says In the flat world, one person's economic liberation could be another's unemployment. What has been beneficial for the Indians has been harmful for Americans as they claim their rights to these jobs. I highlight it here because it has been an important issue in the just concluded US elections where Obama has expressed a clear desire to curb outsourcing at the cost of Americans, which is I think bad news for us at present but might actually be able to pave a new path of progress for us after the current financial crisis has been dealt with. Your views on the issue are more than just welcome.
Thomas further provides what he believes are rules for survival and growth in a flat world. He also touches upon the issue of terrorism and its impact on a flat world, how it could prove to be a lot more harmful. He concludes by calling upon the Americans to dream because America has always been a land where dreams come true.
Overall, the book makes a very good read for someone aiming to understand the global position, the global economy and a global coexistence. But the recent happenings may make some of the issues irrelevant for the present world because I think; the world is seeing a totally different side to globalisation today. Where I may not be an expert in economics, I do realise that I don’t need rocket science to recognise the fact that the global crisis does not carry a tag of Made in India, and yet the profound effect that we’ve seen could be just the beginning of the darker side to a flatter world. Thomas stated that people thought the slow down in the late 90s when the IT bubble bust was the end of globalisation whereas it proved to be just the beginning, what remains to be seen is whether this is the end or just another obstacle.
I would appreciate it very very much if somebody who’s more of an expert than I am (actually, I am a newbie) could comment on what they think the present situation holds in store for the future of what seems to be a little disturbed flat world.
Labels: Books

Nageswara Rao said…
I wouldnt presume to be an expert, but this is what Joseph Stiglitz (Nobel winner for economics and was Chief Economist at World Bank) said while on a trip to India - 600 million people from India (out of the one billion!) have been left out of the “development” fold of globalization.

Then there is a small, but interesting book I would recommend reading, by Aronica and Ramdoo, "The World is Flat? A Critical Analysis of Thomas Friedman's New York Times Bestseller," which offers a counterperspective to Friedman's theory on globalization.

Interestingly enough, the book written about two years back, discusses in the following chapters,
"Debt and Financialization of America"
"America"s Former Middle Class"
"A Paradigm Shift for America" with prescriptions for the future

the debt ridden American society, deregulated financial institutions, mortgage crisis and other related issues, with clear pointers to the economic crisis gripping US today. For more information regarding the same, check this out: mkpress.com/FlatExcerpts.pdf

This is a small book compared to the 600 page tome by Friedman, and aimed at the common man and students alike. As popular as the book may be, some reviewers assert that by what it leaves out, Friedman's book is dangerous. The authors point to the fact that there isn't a single table or data footnote in Friedman's entire book.

"Globalization is the greatest reorganization of the world since the Industrial Revolution," says Aronica.

Akansha Agrawal said…
@nageswara
I took a look at the excerpt, I think it's going to take some time before I can obtain the complete book, unless it's available online.

My say: In view of these details, it seems Obama is right about his policies, tax cuts to 95% Americans and levvied taxes on the wealthier. So an American should be happy now. But since I am not an American, what I primarily want to know is that what does it mean for the rest of the world? US is clearly not the super-power it once was, yet each and every policy of this country will have a greater impact than any other country's policies. Globalisation is definitely here to stay, but I think US will have to step down from its demi-god status, and work with the rest of the world, i.e. people in a lot of countries are highly dependent on the outsourcing and offshoring from the US, and at the same time it's true that working conditions are bad, and these low prices are creating increased competition in the markets.
So then, what I think should be done?
Improve working conditions everywhere: An average American is still far far better off than an average Indian or Chinese or African. So one would naturally say, if we want to start from the lower levels, an average American cannot be taken as the standard. So my priority would not be a 'poor' American, it would be a 'poor' Indian/Chinese. Given the fact that manufacturing jobs are more dominant in China than in India, it will be China that'll have to raise the working standards. I don't think Chinese govt. will be willing to do that, given the military form of govt. plus the fact that China loses all advantage, and who gains?America, obviously.

My point is that US is not the WORLD, and I am not an American, so it would be extremely unfair to expect me. to root for what is best for America.

I also saw the video, and read the various articles and now I don't know what steps should be taken! Obviously, you can't slow down the growth rate of the world just because it's not fair to America and Americans!!!

So could you please shed light on what you think about the whole affair and what should be steps taken, not for the benefit of the US, but that of the world, or provide links to what experts have to say...

P.S. I've noticed that this particular comment that you've put up exists on several other blogs, mostly posted by an anonymous person, but the fact that there's always a personal note (like your first line here) clearly indicates that it's not spam, so could you please reply here, since I don't have any other way of contacting you...
November 21, 2008 at 2:15 PM