I was talking to a friend the other day about how DLF Galleria market despite having great eateries does not enjoy the same food hub level as Sector 29. My friend reasoned that DLF Galleria is not meant as a party place or a place where you would want to go with large groups. Its setting is more intimate, the seating spaces constrained and enclosed. 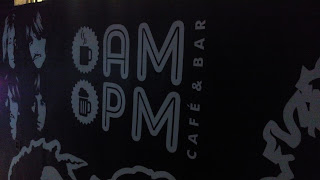 So imagine my surprise when I reach AM PM, a recent addition to the Galleria's food places to find generous seating layouts and large outdoor spaces. I went there with a friend on Wednesday night when the band The Third World was playing some awesome rock music. I am not a huge fan of this type of music, but I do appreciate a change and like the fact that the cafe has taken pains to invite someone to energize the evening.

A special cocktail menu of the place has been designed by Yangdup Lama. So I asked the bartender to recommend one from the list with a bias towards Whiskey. This is a trick thing because all the cocktails look so awesome and their descriptions so interesting that you want to have them all. So to make things easy, I approached the bartender to make a choice for me and narrowed down things to whiskey. He recommended Dirty Scotsman at Indian Harem, a name which enticed the writer in me. It's description reads, the aged whiskey rocks, and rolls in the arms of exotic Indian spices like mint, ginger, cinnamon and sun-kissed lemons. The insatiable thirst of Scotsman muddles the waters. 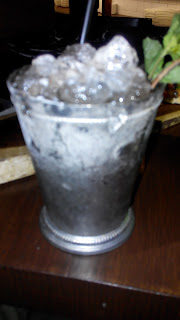 Let me tell you, I was apprehensive about cinnamon in my Scotch, but when I sipped the chilled steel glass, it was too good. It complimented the flavor of the whiskey but too much ice, though had a soothing effect but somewhat diluted the spices.

Bruschetta is something I am never fond of. My friend had some and he also ordered Chaat at AMPM. The Chaat was quite good but not of much help if you are nursing a drink. Ranjodh Singh, who manages the kitchen here, is the person to whom I consulted to recommend the food, as the menu is quite vast. He got us a bite of Bhel Puri, which is an all time favorite. On his suggestion, I tried Bacon DimSum which tasted better than the chicken ones I prefer. 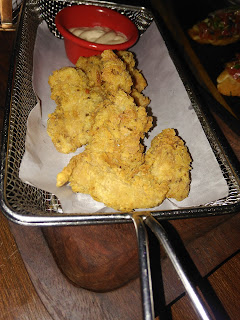 The fried chicken is a must if you have ordered a beer. It has almost zero oil and is soft yet crunchy. I didn't really enjoy the honey chili chicken, I don't know why. It was cooked okay and tasted okay still it was not that great.

At AMPM Indian dinner is more of fun than a daily ritual. We all eat too much of snacks nibbles, only to avoid the proper meal. So the team here offers you a portion of chicken or dal or mutton with two pieces of bread or rice. Just the amount which is required for a complete meal. I got butter chicken, two pieces nicely set on two rotis with gravy in a bowl. My friend, the veggie, got Dal in two cute shot glasses. 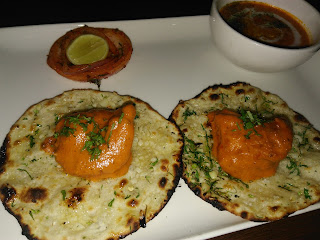 If you are at AM PM, you got to try the Chocolate Bomb. The server brings this cute little ball to your table and pours hot caramel sauce over it. The shell breaks and voila, you get a walnut brownie, vanilla ice cream and of course Nirvana. 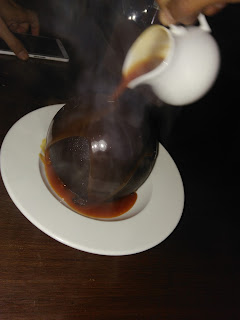 I don't know why they call Shakes, lickables, but it is an interesting concept. I have heard a lot about it so decided to order one. If you want to decide one to try on basis of pictures, it would be a real tough choice. It took me some time to order one, as these are very heavy and fulfilling, you can't expect to consume more than that. I ordered Magnum Upside Down, which is your basic chocolate shake with ice cream, magnum ice cream, cookies and almonds. Fully loaded, so much so that it can be your full meal too.