All roads led to The People and Co in Cyberhub as Delhi NCR was treated to a colossal music invasion of one of India’s most celebrated band, ADVAITA that kicked off an unforgettable experience in the city. A mélange of fusion music culminated on a high note at Canvas Music Hall, Gurgaon as the music community of the city came together to raise toast to good music with more who were in all applause for its very first extravaganza. 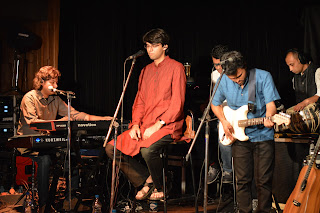 The performance saw an electrifying line-up on stage coupled with ecstatic energy from music lovers who thronged the venue in big numbers. Delhi NCR was witness to some of the best stage production and design it has ever seen with live performances, scrumptious food and sassy ambience. Canvas Music Hall is the next big premium live music destination in town.

Anoop Sebastian, Programming Head, CLC was all in praise of the event 'Canvas Laugh club has finally opened its doors to something that we have been wanting to explore for a very long time. In an attempt to resurrect the dying live music scene in our country, Canvas is aiming to curate and execute a gig with a unique setting, with top notch artists, who will provide you an unforgettable experience. The right way to witness a music gig is when all concentration is channelized towards the act that is on stage.