From the Biggest Gamble to Largest Democracy in the World

It is just a matter of a few hours from now that the results will be declared for the 17th Lok Sabha election. On this note let us look back at India’s history with general elections. How all these started, who were at the pinnacle of power and how things turned out different from what everyone expected back in the year 1952. Lots of questions? Let’s make it easier for you. 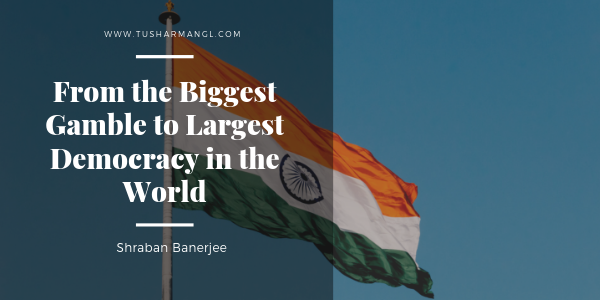 This incredible story of India is nothing short of a dream come true for its people. The first general election was held in the year 1951-52. Back then India was a newly decolonized country with an aspiration to have a people’s government. At that point of time to actually conduct an election was a very decisive step because it was just after the partition which saw the largest human displacement in history. It was a time when the displaced people had lost their home and their means of livelihood was gone. To conduct an election of that country which couldn’t feed its people properly was one of the bravest steps that marked the beginning of a ‘new India”. Political observers named this election as the biggest gamble in history.

This term ‘biggest gamble’ came into the picture because back then India was a newly liberated country that was earlier ruled by the British. The British left but the patriarchy stayed in India. The female voters were not given any recognition prior to this election. So, it was a humongous amount of work that India’s first election commissioner Sukumar Sen had to do. He identified all the voter including all the displaced people who moved from Pakistan to India, got them listed in the voter’s list and then got the female voter identified by their own name for the very first time. Earlier women were regarded as ‘wife of’, ‘daughter of’ in formal documents. This is why the term was given by the political observers because nobody knew if this would come off as a free and fair election, whether the voters will turn out or whether the people will accept this transformation. Lots of questions were left unanswered at that time and nobody was fully convinced that it was the right decision to conduct a general election.
The Transition from an Interim Government to a Democratic one

After all these uncertainties the time had come in the months of January and February of 1952. It was anticipated that only a few numbers of voters will turn out to vote and most of them would be men. Alas, proving everyone wrong the voter’s turnout out was 80.5% in the first general election ever conducted in free India. Even the female voters turned out in large numbers and caste their vote for the very first time. This is when the biggest gamble paid off and India saw her citizens matured enough to establish a democratic government.

The voting procedure was completed without any problems what so ever. It was then time to declare the results. The result was very predictable, Congress had done the majority of work to free India from British rule just had to remind the citizens of its history and it did exactly that. Congress won with an absolute majority and Jawaharlal Nehru became the first Prime Minister of Independent India. This marked the beginning of the Congress era.

It was the new India everyone visualized that was finally taking shape and maturing into one of the biggest democracies the world could ever imagine and Congress swept the polls in all the general elections to come in the near future. Thus, the biggest gamble became a landmark step that India took to establish democracy.
Uni-party in a Multi-party System

India was under Nehru’s administration from 1952-64. India was growing as a developing nation, guided by Nehru’s unique NAM policy for external affairs. This is the time India saw major reforms and increased legal rights of women. Many new development schemes were introduced like the five-year plans that made Congress a big name in every stratum of the society. Hence there was no competition for the Congress as it delivered results just like it had promised.

Although there were multiple parties and other independent candidates they failed to secure vote as Congress was a ‘Rainbow Like Social Coalition’ that appealed to every section of the society. Hence the other parties lacked a solid campaigning agenda.

Things took a turn when Mr. Nehru died in 1964. it was then that the leadership was in jeopardy as it was Nehru who had been leading from the front. Now the question arose after Nehru who? The question was answered in the form of Indira Gandhi. She was the one who started to fill the void that had been created after Nehru was gone.
End of an Era and the changes in the Political Scenario

The 1977 Lok Sabha election marked the end of Congress era with Congress securing the lowest number of votes of all time till then. It was after almost 6 years that election was held because the then prime minister declared an emergency and all the civil rights of the citizens were curtailed for a period of 19 months. The scheduled elections were canceled as the Republic of India was under threat. Though it is debatable if India was actually under threat or not. Hence in the immediate Lok Sabha election, Congress received its all-time lowest vote.

This completely changed the scenario of Indian politics and the opposition leaders understood that to defeat the Congress they need to unite and be on the same team against their common enemy. This brought into play the concept of alliance politics. Which was a vague idea till then.

Hence the scenario of politics changes completely as Alliance politics got stronger and we can see that in recent past how different alliances have been chosen by the citizens of India. This gives us an idea about how the political scenario changed and the journey of India to her 17th Lok Sabha election has been full of ups and downs.

Now it is completely different in term of the instruments used, the agendas, the procedure of campaigning. It has been an eventful journey for India from the 1st to the 17th Lok Sabha elections. This gives us a glimpse of how India has emerged as the largest democracy in the world and have maturely handled the transition from one government to another.

I know what is going through your mind right now. Are we going to see another era of the NDA alliance tomorrow? Well time has the answer for this question.
Labels: Politics