My mother was in a terrible rush from the morning of 14th June, as the day finally came we are going to Bengal. After three years, we got a reason as my Didi got an internship in Rishra(an industrial area in Bengal). Moreover, my father was in Delhi for his professional meet. This was the time I have to take all the responsibility of Mumma and act like an adult boy! 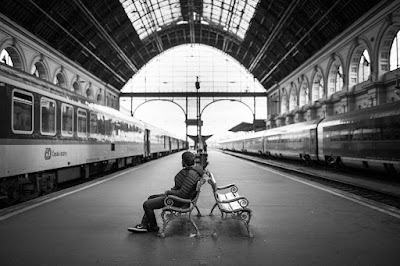 Hurry up, Babu! You are always too slow. This was usual, as my Mumma is still panic
until the train arrives. After an emotional goodbye to Tango (my dog), we left our home at 3:30 p.m. which was 3 hours before the train's arrival time. The moment we reached the station, I
started searching for a lonely and clean place where I can sit peacefully and watch out my
Mumma too. After founding nothing unusual in social media, I soon lost in my thoughts
wondering about life, world and till the human fantasies can go up to…

I came out of my thoughts when I heard a female voice from the station's speaker announcing
" Duronto express is arriving on platform number", and the headlight of the train with a loud horn was approaching towards the platform. I took all the luggage and was about to say my
Mumma to be ready but Mumma was already looking at me, and I was about to experience the
same rush at least for, few more minutes.

Berth number 53 and 55 here it is. "Please let us sit" Mumma requested to the people sitting on
our berth and ordered me to settle all the luggage. I sat on the berth by shooing some older men,
acting like they're dead and took a deep breath. But I felt very disappointed by discovering
nothing unusual around me, nearly all of them were having ugly fat faces. I predicted the rest
of the journey and said thanks to Mumma for fitting me a brand new phone with internet
recharge!

Duronto express is a pretty good option while traveling Bengal; it's economical with low delay
rates. The only problem with this train is its stoppages. The first stop of the express after Kanpur
is Banaras, around 200km, thus indicating no vendors and no fast food available till midnight.
Instead of a few railway staff bringing a tasteless meal, just for formalities and providing really
warm water when it's already 48° outside.

I was laying in the upper berth watching a recent SciFi web series when a hand holding meal
tray came towards me, and I took that tray without even bothering that person maybe it was a
railway guy or Mumma sitting in the lower berth. However, it doesn't change the taste of any
dishes in the tray. Dal and egg curry were full of yellow water with no salt added. I asked the
railway guy, "what do you do with wasted food?"
"We feed animals, mostly"
He replied and began to move as he was in a hurry to deliver other people's orders too.
I thanked God for make me an animal lover. Without wasting any time I packed my whole mean
nicely as it was earlier, the only change was, the curd and egg were missing. Eggs are always
being my favorite, will never waste under any circumstances.

After eating egg and curd, I noticed something which should be seen earlier. A girl almost of
my age was there in the next compartment, which was just beside my berth and was easily
visible from the steel cage. It was quite late to noticed her, the moment I saw her, she asked me
for a charger as her mobile battery was about to die. I looked at the switchboard of my
compartment and found that my charger was already busy. I regretted by saying sorry to
the girl, but she replied it was okay as she forgot to bring a charger with her. I immediately suggested her to buy a new Nokia phone I did, which comes with great features, especially its
long battery life. This time only an uncomfortable smile came from the other side, .i realized that I
had committed a mistake by saying this awkward statement, but I am too emotional about
brands! That is one of the reasons why I still don't have a girlfriend. Again, I failed to make a
memorable journey. I decided to complete my remaining web series and not to bother
about my surroundings! 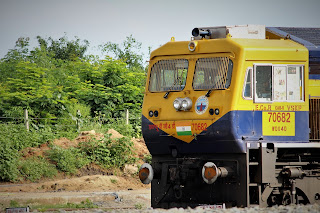 I don't know when I fall asleep, but again, it was the station's announcement which awakened
me. Sweat was all over my face; my phone was still on; everyone around me was gossiping and
chatting. Sunlight too enlightened the whole bogie. Mama gave me a chilled water bottle when I
came down and sat beside her. I felt the change of environment, which assured me we had entered Bengal. &quot; We'll reach Howrah in around 10 minutes, the train is on time,&quot; Mumma said to me as she was indicating that I should be prepared with luggage. 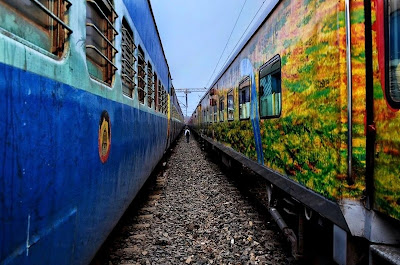 It's a bit early but I was able to see many railway tracks together, busy train schedules and the
voice of railway speaker was increasing with every second. This time I have told Mumma to
walk slowly and calmly as Howrah is the last stop of Duronto; still, every other guy was in a hurry.
I don't know why people can't relax and be happy from the gift they got from the universe,life! Many of them didn't even realize.

However, I knew that the first part of this journey has come to an end when I saw a yellow board
near the end of the platform in which text was written- "WELCOME TO WEST BENGAL"
Labels: Subroto Writes