Do we belong to the era where we are aiming too high for our dreams and leaving no stones unturned in building our extravagant standard of living?

The answer is not that simple because we have complicated it with our ideas of being fit in the definition of so-called modern society. So let us rephrase the question in a much straight forward but an undesirable way. Do we aim high now for us or society? Are we walking on the path of proving it to the world more than ourselves that how we are better than others? 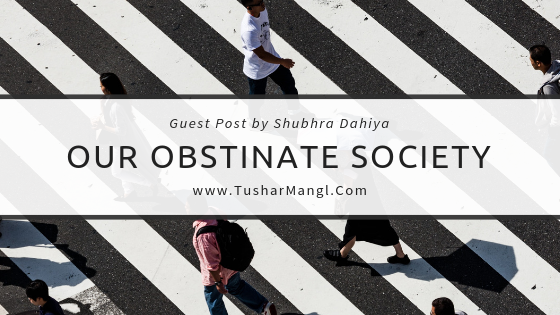 Unfortunately, the feeling of being superior has become an essential mindset of our ultra modernized club. This can be seen right from today's an upbringing where a child is conditioned to choose many sophisticated toys with more features than his friend, whether it's a student getting better marks than his classmate this time but not from his last performance, whether it's an employee who is getting higher appraisal in contrast to  his colleagues rather than his own journey in an organization . Has it not become a matter of proving it to the world more than our self that I am good enough?

We are trapped. When achievements of life are measured in terms of comparisons and contrast, it's difficult to survive while living a life of self-satisfaction and isolated success. On the one hand, we want a love which is complete in itself, but then this conditioned mind wants to love with other benefits too. We crave for self-satisfaction, but then this society gives us another chance to get more than we deserve. We want to be internally contended and happy with our present life, but what about the regrets and gloominess from our self made choices and then their failures.

There is no end to this dilemma of what we are meant to do being a part of this so-called 'hi-fi' society and what all are doing. But the good part is it not as difficult as we think to come out of the jaws of self-worthy dubiousness. It is just the initiative backed up by strong willpower whether one wants to stick in this egoistic drama or live a life filled with peace and self-satisfaction. Yes, it's easier to be called a victim of this mad race and keep doing things to impress others in all genres of life, but at the end of the day often people feel lost and crave to be at peace.

The joy in having small things achieved, least comparisons, being human, and most important realize the significance of one's own true potential is out of this world.

We need to live this life of being modernized in a real sense of the word, not as copy cats because we are humans, not just Zombies.
Labels: Guest Posts