Nelson Wang's China Garden defines the evolution of Indo Chinese Cuisine in India. Spread across India, the restaurant chain as two outlets in the National Capital, Delhi. Recently they opened up their doors at Trillium Mall, Gurugram, a short distance from the City's district center and the famed Gymkhana Club.

In fact, Mainland China used to be located a couple of miles down at the famous Sector 29 market before it shut down. The locality also used to boast of Unlimited by Golden Dragon, which has also been shut down since. 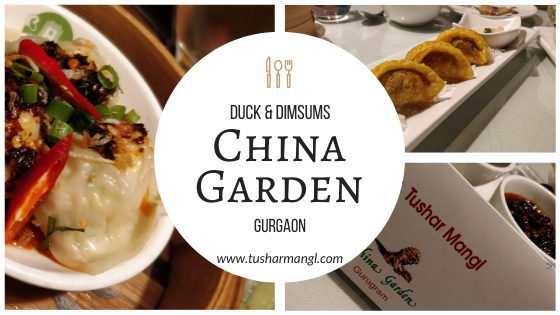 Rising amidst the demand for Chinese Food in Gurugram, the place does impress. It has been beautifully decorated in shades of gray and blue. I visited it recently for a Duck and Dimsums fest curated by Plates2Miles, a community of food lovers with an active Facebook group. They organize a variety of food events across Delhi NCR, and this was the first time I was invited to attend.

The best part of the evening apart from the great company of P2M family was the service. It was like choreographed to perfection. We had five tables to ourselves, and each dish was served on all 5, at the same time in the order listed. The service was swift, with no goof-ups, and they paid good attention to allergies a person might have. That level of attention is what differentiates a place.

The team also made sure to compliment the dishes with a wide range of drinks.

The principal offering here was the Duck, done crisp, and tasted delicious. This was followed by a variety of different dim sums, uniquely flavored, out of which I just loved the Baked Cantonese Chicken Puffs.  Other Dim Sum and food I sampled were

The final course was China Garden Clay Pot Rice. I am more of a Noodles than a rice person, but the clay pot was done really well.

In the desserts, they had Nutella Chocolate Baos, which were like WOW! I could have eaten a dozen if I was not already filled up with the yummy food. They also had a Mango Pudding, which tasted great. The Cantonese Egg Tart was something I hadn't tasted before and I liked the taste.

Simply loved the food, and the great company of the P2M community only made it better. The people running this community, Mohit Mahajan, P.S. Bedi, Sharmishta Mukherjee Cheema, Vanit Taneja, and Sahil Mahajan, really put up a lot of effort to make sure that the event is a real success.

The event got all the better for me, as an opportunity came up to meet Mr. Henry Wang himself, the owner who is excited about this outlet and the food at China Garden. Considering my experience, the decades old brand still rules the game. Looking forward now to visit again to try the other parts of the Menu. I am sure, they got some good surprises their as well.