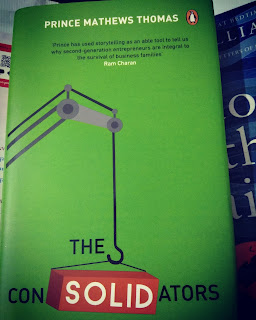 The author has chosen second-generation entrepreneurs as the subject of his books. The ones who took over from their fathers, known, established faces of their respective fields with huge expectations. Though it is a relatively easy entry for them, the picture is not as rosy as it seems.

They have had their own share of struggles to keep up the expectations and the establish their own space in the businesses they took over. Also interesting to read is the acquisitions and new capacities built by these individuals.

At SIS, which went for an IPO last year, the power balance between Uday Singh and Rituraj Singh the scion of the SIS group makes for an insightful read. How they have neatly set the boundaries and led the company to great growth makes for a good read. Also interesting is the Chubb deal. That an acquisition into an unknown territory was not only made into a successful buy but also eventually turned into a cash cow to cushion further acquisitions.

The book is well researched but it leaves you hungry for more. Perhaps more depth could have been added to the stories.