A nice article on Kashmir's options in TOI

I'm taking the privilege to share this shared post from one of my friends blog (with his due permission of course!). This article, she told, was published in the Times Of India in one of the Sunday editions of August 2008 during the Jammu & Kashmir disharmony period (and yes, no points for guessing that it was the matter which was fueled deliberately by pro Pakistan separatists only).

My friend said she liked the Author's view point and concept of the situation and thats why she shared it on her blog. And, reading it there, I also felt the same.... thats why I'm sharing this with all of you here thinking that it will be a better read for all those who didn't read it there in the TOI copy.

All credits and credentials goes to the author as well as the newspaper. I'm just copy-pasting the post with due permission.
Here it follows....

A Kashmiri Muslim student came to see me last week and it was not long before our conversation turned to the current azadi wave in the valley. He did not think that an independent Kashmir was viable, and its only choice was either to be with India or with Pakistan. After a pause he asked guilelessly, why was India a democracy and Pakistan an autocracy? This set me thinking. I told him that Pakistan was more the norm — Third World countries do not generally become stable democracies. India is an exception.

India’s democracy and Pakistan’s autocracy have deep roots in history. India’s nationalist movement was older and more widespread. Millions of ordinary Indians were drawn in by Mahatma Gandhi. Muslim nationalism emerged later and did not become a mass movement — Jinnah was more comfortable in the drawing room rather than the ‘dusty road’. While Indians prepared for democracy over three generations, Pakistanis-to-be got the itch only a couple of years before independence. After independence, Pakistan’s politicians performed abysmally. The Muslim League Party disintegrated; there were nine governments in 10 years and the army under Ayub Khan seized power in 1958.

Jinnah’s great error was to impose Urdu as the national language when only 8% of Pakistanis spoke Urdu and 55% spoke Bengali. Thus, he sowed the seeds of Bangladesh. Sri Lanka made the same tragic mistake. India did not succumb to this anti-democratic temptation by imposing Hindi. This is how India gave space for subidentities to flourish, allowed the rise of peoples’ leaders from linguistic states, and deepened democracy.

Although his slogan in the 1945-46 elections in undivided India was ‘Islam is in danger’, Jinnah wanted to build a modern nation. Even though General Zia-ul-Haq reinforced theological priority, i do not believe Islam prevents Pakistan from being democratic. The rise of Islamism does tear the ordinary Pakistani’s loyalty between the brotherhood and the state, but the maulvi is not Pakistan’s natural leader as in Iran. The chief obstacle to democracy is the army. Hence, i am relieved that Musharraf is gone. It does create a vacuum that might be filled by extremists, but in the longer term the best thing for India is to have a democratic Pakistan.

For a brief moment in the mid-1970s the two nations seemed to converge. Zulfiqar Ali Bhutto began to steer Pakistan towards genuine democracy while Indira Gandhi took India on the path of dictatorship. The paths diverged after 1977 as Mrs Gandhi called an election and Bhutto was executed by Zia in 1979. India returned to the path of democracy, whose binding glue is the liberal notion that all Indians are equal citizens before the law, owing loyalty to the Constitution. This is a British legacy. Before that we were a collection of communities and kingdoms. Although we still feel loyal to our caste or community, we are different from the tragic Pakistanis whose land has been hijacked by the military. Once there is military rule you get a state within a state. You are powerless to stop your secret service from creating monsters like the Taliban and before you know it your country has become the world’s top university for terrorists. I then turned to my young Kashmiri friend. He wished more Kashmiris could come and see India’s vibrant democracy, its confident economy and the rise of the lowborn. ‘‘There is a simple choice before all Kashmiris,’’ he said. ‘‘If you want to be a citizen of a modern democracy with unparalleled opportunities, you will choose self-assured India. If you believe that Islam is in danger and you want the army’s protection, you will choose tragic Pakistan.’’

[Source web location: http://epaper.timesofindia.com/Repository/ml.asp?Ref=Q0FQLzIwMDgvMDgvMjQjQXIwMjIwNQ==&Mode=HTML&Locale=english-skin-custom]
Disclaimer: Article shared just for the purpose of thought-sharing only. No personal contribution in terms of writing or propaganda, or any monetary aspect attached of whatsoever kind. 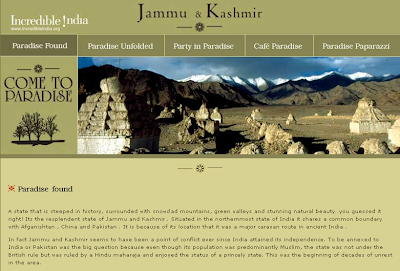 Shelly said…
It was a terrible day for Delhi yesterday. A few fanatics in the form of terrorists has again managed to harm our spirits and unity.

One of my Muslim friends was very very upset with these fanatics... the so called Jihadis (and actually correctly termed as 'fasaadis' by social clerics a few days back), which he said were bringing a bad name to their community y their misdeeds.

And, thinking back, really don't an entire community get on the back foot for while only 'coz a sub-minuscule percentage of them are on the wrong way? I didn't have any word to console him that time. He lost one of his distant relative in these very blasts.
September 14, 2008 at 11:24 PM