s are elder than myself, they all have had work experience before joining in for MBA) got a chance to visit the sub-urbs of the city.
The scroching sun in the rainless monsoons was making us all look for drinking water with each passing 10 minutes. The Merchandise Shop located in the locality was making money, selling "mineral water bottles" n "Colas" to the thirsty crows on the Industrial visit.
As I emptied the tumbler carrying with myself, I heard some disturbances among the students.. I cornered to interrupt and ask what the matter was. Shipra seemed annoyed with the rest on being teased as "Ms. Super Hygenic" for she were asking them not to buy the "so called bottled water" for it not being actually the "Bagpiper", rather being adultered..
I had a look if she was right, n she was right. A piece of plastic paper was bound n joined together instead of a seal that should have been there on a mineral water bottle.
Its not just one case, we come across many such happenings in our immidiate surroundings everyday.
We get along numerous brands right from the dawn, when we"Colgate" our teeth, till late nights when we switch off our "Sony's", to wake up to another day with trusted brands.
But sometimes when we find out that our reliable Brands aint exactly wat we bought, we feel ditched.
Many a times, we go shopping in hurry and pick up our routine things with a glimpse of familiar logos, designs, graphics on the packaging. And on discovering "FLAIR & LONLY" rather than "FAIR & LOVELY" some of us, really dont do anything like complaining against the vendor.
The fake brands are being sold in the market like as such and the counterfeiters are making money.
According to a FICCI study, the impact of counterfeiting was highest in the software sector to the extent of 70 per cent, next came auto parts where the impact was about 35 per cent, down the ladder came the pharma sector with 15 to 20 per cent impact, and then the FMCG sector with between five and 15 per cent impact.
These "look alike" products are not just a substitute for the genuine brand, but not maintaining the quality standards, these counterfeits, are hazardous to the users.
Unknowingly, we entertain such "business-people", who donot hesitate taking lives of the people as a five year ol 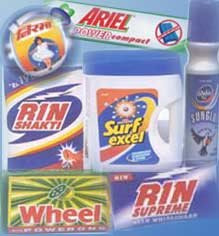 d treats his "teddy- bear".
Many of us dont know when "TATA SALT" becomes "TAJA SALT" or "NIRMA" becomes "NISHMA", not even do we spot much when "COCA COLA" becomes "CAMPA COLA" and "LIFEBOUY" becomes "LIEEBOYE".
Apart from the harmful effects on the consumers, these counterfeitings, are bad for the Brands as well.
BRAND is a company's greatest asset. Brand is a promise of value and an assurance of quality that every customer looks for. Yet counterfeit products, artful lookalikes, are constantly entering millions of homes and bleeding brands of their reputation.
According to a survey that was conducted in Chennai where a fake product was given to 100 customers, out of the 100 people surveyed for this, about 85 did not realise that they had got a duplicate product. About five persons said `it's my fate', another four were angry and were on the verge of marching to the distributor, which they did not finally do, and one person said he was going to write to the company about the fake product being in the market. Shows how much awareness consumers have about the products they want to buy.

This is a problem even higher in rural areas and sub urban areas.

The most comprehensive and effective remedy to avoid such traps is the consumer awareness and we need to wake up actually and know the consumer rights.

Look- alikes are fun, but only in wax museums.
Labels: Richa's Randomness

Anonymous said…
http://www.architectsban.webs.com as http://www.seekangroup.com Read more about Green eco architectural designs are reusable materials, green designs etc.. ..… Create an Eco friendly Green design… Save Earth.. http://www.interiordesignersbangalore.com/" as of natural materials http://www.interiordesignersinbangalore.com with almost modern concepts using A few quick ways to reduce your personal carbon footprint: employ eco-friendly methods of travel, eat, minimize use of plastic products and save electricity, water, paper and use of non-toxic alternatives http://www.architectsbangalore.com Carbon Footprint is a measure of the impact human activities have on the environment in terms of the amount of greenhouse gases produced, measured ternds aaaa
May 26, 2009 at 12:46 PM