Who do you trial? Who does this? What is this all about? Is this playing with justice or is it just a mockery of the whole thing? Well, there are lots of questions and I find very less of answers to all these.

Mohammad Ajmal Amir Kasab is the only survivor from the pack of Pakistani terrorists who attacked Mumbai on November 26, 2008 (better known as 26/11). He was captured while he was on a rampage killing scores of people and injuring hundreds, on that dreadful night in Mumbai. There was a lot of fuss in the last few months about him being a Pakistani or his age to be prosecuted in an adult court or with his captivity. Recently, the long awaited trial started and everyone is waiting to see what the court will decide on his fate.

What is there to decide? Hang him!! Simple…

Well, I do not want to hang him without getting all the information from him and only after proving that the attackers were all from Pakistan and the whole incident was built up by the Pakistani Army, Government and LeT. Once we prove that and bring it in front of the world, we can very well start the response by slaughtering his throat! Is not it? 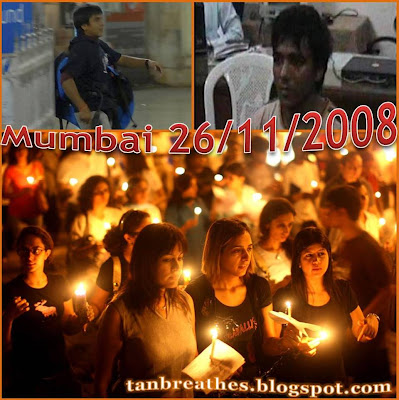 One would laugh when I will tell that, days before Kasab was taken to the court, he asked for a few ‘very important’ things in life. He wanted to read a Urdu NEWSPAPER every day morning (along with his bed tea and toast, I suppose). He wanted to have flavored TOOTHPASTE. He wanted to have a STROLL in the lobby in the jail where he was kept. These were his humble demands while he was in jail! Maybe next time, he will ask for Chicken Tikka Masala from Taj Restaurant; and I am sure there will be some hard core professionals (like the defense lawyer who decided to work with Kasab, after having a long time career with underworld) who would ‘think’ about providing this humble man with these modest necessities!

Why don’t we just shoot him???

I asked the same on twitter and a few replied that we are supposed to be cultured and rational human beings and hence, we do not do that! How good is that? You come to my house, beat me up, take my belongings and I remain indifferent to all these and smile – as because I am cultured and rational? Oh! I just laughed at those responses.

Anyways, I am waiting for the final judgment on Kasab. There are some 86 cases filed against him, I believe. I really think people in India has very less work to do now (thanks to recession) that they sit down and thing of all the cases that could be filed against this man! Hehe… rational bunch of nincompoops!

This is one of the reasons that Air France treats our passengers like cattle and Andy Bichel (the old Aussie Pacer) could address Agarkar as ‘bloody Indian’ – still in 2009!! Call that rational and show more humanity and some historic culture!

Let’s see what the court says – for I just do not want to say anything else right now. Let the court decide, and once decided we can see it ourselves. I hope we have not forgotten those sleepless nights and hours of terror.

Kasab is lucky, that he killed Indians and not Americans. Else, there would have been an Iraq or an Afghanistan by now in the country of ‘purity’ – Pakistan! (lol)

G said…
I am so with you on this!.. I was just thinking over it and its pretty obvious that he is a culprit (no duh!!)... then why the hell provide him with a trial!... the national and international news channels flashed his pic with a gun in his hand killing those people. Now that he is caught.... he gets a trial! I think India is being really generous by giving him this whole trial...on the other hand also very truly retarded too! And if it is the law that everyone deserves to go through a trial and stuff then why don't they just get it over with! What exactly are they waiting for? Another Pakistani coming along hijacking the Indian flight and demanding the release of Kasab??!! It is purely ridiculous. I would support the whole trial process if there was a doubt over if he is a terrorist or not. When its all there right infront of us..then why not shoot the bastard and get it over with! We don't need adding of 500 terrorists to our already large population.

I am stunned by the responses I got in Twitter... The young generation itself think that we should try him! Pata nahi dost, lekin lagta hai kabhi to ye log sudhrenge... kabhi to hum ek ho payenge... kabhi to yehi log jo uska mukaddama chala rahein hain thoda sa rational banenge!!

BTW, Afzal is still hoping he will escape... I really really hope that they will not politicise Kasab's trial too...

Praveen said…
I feel that those idiots who speak of being cultured and keeping the tradition of peace should be slapped first..I strongly support all the views u put here...We shouldn't be wasting topayer's money to decide his age or the length of his manhood..
Its time to be brutal with the inhuman idiots!
May 13, 2009 at 8:21 PM

Piyush said…
dear..its not only this one case of kasab..what happened to the people who attacked parliament..
with such a politics..where caste decides the fate of even an active government..where in the entire election process you do not hear a single speech or argument about the future and pride of a nation..instead people keep discussing and deciding pre-post poll alliances to form government..even expecting any government to act on something which may alienate an entire religion..is outrageous..almost surmounting to a crime unto itself.
so sweetheart start hoping that we get to listen some speeches about the proud nation that we were since the times immemorial, are and will always be..than we may expect some swift JUSTICE imparted to a nation of over a billion people..
May 14, 2009 at 1:58 AM

Tan said…
Praveen, you said it right mate... the thought process needs to change... otherwise, none else would...

Well, the authority can always decide what to do about Kasab, but trying him is certainly irrational...
May 14, 2009 at 4:50 AM

Tan said…
Piyush, we have not forgotten all those incidents. We have not! You know what? I really appreciate Rajiv Gandhi and his predecessors who implemented the Caste system and reservation system along with the preliminary 5 year plans. But since then, whatever has been done with those 5 year plans (increasing them to 65 years now) is not good and a thing to be thought of... I am really worried about the Women's reservation thing too... These are good initiatives, but needs to be in good hands... otherwise, a girl child will not die for sure - but an elderly general caste boy would commit suicide - days are not far!
May 14, 2009 at 4:54 AM

Si_Lee said…
I appreciate the sentiment .. and it is not misplaced either ... but it shows that ppl hv missed out on one very important thing here ... the role of the indian govt. in promoting terrorism ... I will not go deeper into it as i have no concrete evidence to substantiate my points but only circumstantial evidences...
minority vote bank, communal politics .. well many have a rather cursory understanding of these issues largely because they are not directly a part of it .. and one cant expect them to be either .. infact by nt being they are lucky .. i would say ...
the point is when you put on the spectacles which hold that perspective of minority politics, govt. abetted terrorism .. things simplify and no longer remain a puzzle ..

Tan,
I had once written an article .. very large but it showed hw govt. during late 80's and early 90's conveniently let terror build its stronghold in india ...
http://missionjagruti.blogspot.com/2008/08/horrifying-reality-of-kashmir.html

You have talked about the things I missed out... Hope people would scroll down and read your thoughts too... Thanks :)

Prasant Naidu. said…
@Tan,
Same feelings here and i asked the same question to my bunch of lawyer friends. The answer was that to prove someone guilty in India we need to give him a fare trail.My answer yes in that we spend 8 crores for his protection. yes it is a joke. Why don't we shoot him and set an example that we are not going to tolerate any more. Well we won't since we want to show the world that we are cultured and civilized country. Crap. We need to learn from the wholly country Pakistan, the way they handed the bodies of air marshals during Kargil.

I won't be surprised if Kasab is not hanged and gets a life term after few years.