My experience with trans genders 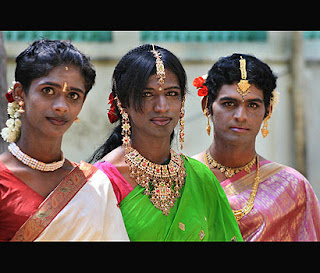 After my college days, I was happily placed in one of the then top 5 IT companies through campus interview. Propelled by the unbearable politics inside the company, I resigned my job within four months to find myself in a lengthy jobless period as it was September eleven attack time. Myself and my best friend decided to use this chance to travel to Mumbai and stay with my old school friend to hunt for a job.

I was very happy and looking forward for that moment as it was the longest train journey in my life and it was my first time to Mumbai. Before boarding the train, with the usual youth self, we promptly checked the reservation chart for any beautiful girl names around our age. I cant remember if we found any but we were enjoying every moment of it.

When a very informative co passenger informed me that we crossed border, it didn’t mean anything for me. Couple of minutes after the train left the first or second station in , I heard a little bit of unusual noise from the first part of the compartment. I looked at that direction only to find nearly 15 transgender people clapping hands and asking something in Hindi. I have to admit that I don’t know Hindi more than ‘ak gauv may ak kishan rahuthatha’. But I don’t have to know Hindi to comprehend what was happening there.

These transgender people were asking money from the passengers. When they refuse to give money or when they offer less money than their expectation, they embarrassed the passengers by touching their cheeks, partly undressing, sitting on their laps etc.

The first person refused to give money and enjoyed all these rituals. The second person gave ten rupees and got little bit of abuse. No one escaped their teasing and abuses except a person who handed over 50 rupees. What do you think I did? I took my wallet immediately to take fifty rupees and kept it ready in my front pocket. I really didnt’t want to give any money as I wasnt aware of my requirement in Mumbai. But I was more than definite not to let them anywhere near my intimate zone. They were just one row before me. I was waiting like a kid who would handover the paisa given by his mom to the temple elephant. Nothing note worthy happened. They got the money from my hands and moved on to my very informative co passenger who refused to give any money. I enjoyed all the rituals done to him. But you know, he escaped with out giving any money at all.

I saw similar incident through out Mumbai in my one month long tenure there. This is almost like a theft. Instead of threatening to take your life as other thieves do, they threaten to damage your self respect. I was very furious loosing my money in this way. I remember blaming even the government and police people for not taking any action for this. Even in Tirupur, where I live now, one transgender person entered my friend’s office in a complex and threatened to create chaos if he doesn’t give money.

Though these activities of transgender people seem to be uncultured and disgusting, I got other ideas when I thought deep in to this issue with empathy.

I have never seen anyone employ a transgender. Even their parents get rid of them once they come to know their identity. No one in the society, right from street youths to elderly people, recognise them as human being. I have never seen a movie depicting them with respect other than Manirathnam’s . Every one treats them as an animal to make fun off. When I was speaking to one my intellectual friends, he said ‘neglection is more serious than death sentence’. How will we feel when we are neglected by our own parents? They are facing neglection from the whole society. I think this sense of neglection and hunger put together made them as what they are now. At the time when court recognised the homo sexuals, I wish the society would recognise transgender people. When we can treat a blind as handicapped and help crossing a road, why can’t we recognise them? Aren’t they handicapped?

My life is my lesson! said…
Hey Mahesh,

I experienced the same ritual last month when i was on my way to Banglore in train. 12 of us were traveling to attend my friends sisters marriage when these transgenders came in and demanded money, except for one of my friend who acted as if he was asleep all of us had to end up paying 10 bugs each to them. We regretted having given them money when they left though . :)