A new political front in Punjab

Navjot Singh Sidhu has finally opened up his cards by creating a rag tag party of rebels. He has also picked up a unique name, Awaaz e Punjab, as in voice of Punjab.
While it remains to be seen, how many more dissidents he is able to attract, he already has created ripples in political circles. 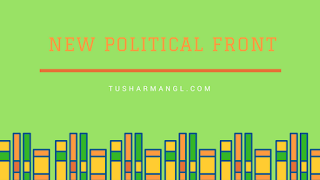 He is an astute politician and this can be gauged from the fact that he disassociated with BJP when the writing on the wall is clear that its ship is sunk. Also he has created this new front with Bains Brothers and Pargat Singh. Not known much beyond their political constituencies but they are significant people. With them, he has shown that he is ready for entire Punjab, as he is active in the Majha region, Bains Brothers are active in Malwa region and Pargat is an MLA from the Doaba region. All three regions covered.

Also important is the muscle power and financial power of this new front. These leaders also enjoy a cult fan following, which could make a difference on the ground realities. But it remains to be seen if the public would accept yet another party making tall promises.
Labels: Politics