Rahul Pandita's Our Moon has Blood Clots is an insightful read into the travails and hardships faced by Kashmiri Pandits over decades. They have been forced into exile time and again, their religion making them an easy mark, their identities always under grave threat. It is indeed true that the Indian State's attitude towards Pandits is mostly to ignore them, as if wishing that ignoring a problem will solve it. 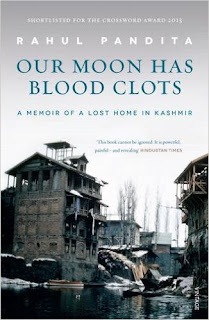 In his book, Rahul takes us through his childhood home and how Pandits used to live in the Kashmir Valley.He chronicles the bloody exodus of thousands of Pandits in the 90s and how they were made unwelcome in their own land. The state of refugees is appalling as Rahul describes it, and one wonders why no ever raised a voice against it.

His research is well done. He does not stop at one story, he digs up many stories of Kashmiri Pandits to get that right picture, the right perspective. The butchering of Pandits in 1947 add to the text and some how completes the book.

A must read, I say for every Indian for simply we all ought to know about this. Kashmiri Pandits have faced persecution since times immemorial. At hands of foreign invaders, the Mughals, the invaders again in 47 but to be persecuted by their very own is a different story altogether.