4 thoughts on Gandhi’s Satyagraha and Non-Violence 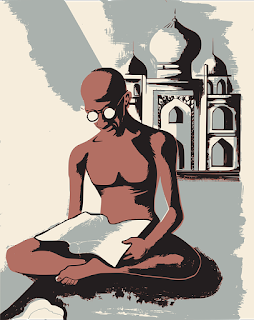 While we are all are poised to celebrate Republic Day, it is the apt occasion to write about one of its most admired heroes without whose contribution the India could never become free and no colonized country become a republic in its true sense. However, there were, and still are many opponents of Gandhi who even tried to prove that the non-violence, as a method to fight British empire, was not only inappropriate but a downright blunder. Many people had doubts regarding Satyagraha or non-violence during Gandhi’s times. In today’s times of military trials, it is but natural to have doubts regarding the relevance of non-violence. So, let us understand the full import of Gandhi’s Satyagraha, what it was not, and relevance in today’s time:

Myth: Satyagraha was for weak
It was the strongest weapon used against violent forces. He famously believed “Satyagraha is the vindication of truth not by infliction of suffering on the opponent but on oneself.” In fact, the very concept of Satyagraha breaks the myth that non-violence is an excuse for the coward. Nay, it even sketches a line between the active practitioners of non-violence and nonchalant, passive cowards. For, it is not the work of passive cowards to continue his fight for truth in the face of violent persecution, without raising a hand and without stopping a step. Satyagrahis would not just offer cosmetic sympathy. Apart from their active struggle against oppression, Satyagrahis would also actively participate in removing the social evils like alcoholism and untouchability and also achieved considerable positive results and support.

Truth: Satyagraha strengthened women
While the feeling of patriotism was equally shared by both men and women, the latter generally refrained from participating actively against the colonialists. Even those who were interested in participating in the struggle against freedom were restrained by social customs and more importantly barbaric nature of the oppressors. However, Gandhi’s non-violent Satyagraha offered them a legitimate, acceptable means to actively stand against injustice and persecution. The movement demanded community participation and thus offered communal support, more safety and encouraged positive peer pressure. Beside’s Gandhi’s liberal thoughts that broke the barriers of caste, creed and gender further encouraged them to come ahead and fight against oppression. Hence Satyagraha played a vital role in strengthening women.

Misconception: Non-violence is not relevant anymore
If the Gandhi’s non-violence was irrelevant in today’s context the militant countries of the world would have been ruling over it. On the contrary, many of them are largely being deserted by their own inhabitants. The victory fetched by bloody wars has failed miserably in bringing about a long-lasting peace. In fact, the reason lies in its very own structure. The violence is based on the foundation of fear. The victory brought about by violence is short lived and starts a vicious cycle of hatred. The defeated keeps on planning for revenging the defeat while the victor is more worried on strengthening the army to avoid such attacks rather than enjoying the victory. Fundamentally both of them lose.
Non-violence, on the contrary, focuses at burning away the pride and cruelty and rekindling the natural kindness. Hence there is no loser in that war. The Satyagrahi gains his self-respect while the opponent also regains the precious natural gift of humanity: Kindness.

Observation: Vital role of Non-Violence in development of civilization


Upon analyzing the human civilization we would observe that the most primitive ancestors of human were wandering hunters. Gradually they started farming. So, they evolved from being violent to many peaceful creatures (vegetable eaters). More interestingly, only after they started farming they finally settled down, villages were formed gradually and finally, the culture flourished. So, we see that for any kind of steady cultural development, non-violence is the key element. Hence, non-violence also offers a fertile ground for scientific, cultural and artistic development.

Jitendra is a creative writer and a peaceful soul. Writing has not just his profession or passion. He admires writing for its therapeutic effects on the mind. He loves to visit the abandoned forts and national parks when he is not writing. He can be reached at worldofwords1970@gmail.com
__________

For guest article submissions at this website, kindly get in touch at orangy [dot] in @ Gmail [dot]com
Labels: Guest Posts Society