The nomads searched for source of water. So, they settled down near a river – a natural source of sweet water. People started taming the wild and growing crops tearing apart the torso of the Mother Earth. Then they invented fire, wheel, axes and knives and walking on the same streets, man invented the computer and sent satellites to their orbits. All these things have taken a long time. Man became civilized in the meanwhile. Civilization brought many more things into our lives which we never thought of while being nomads hunting only for food and living. Prostitution and religion being such things that came into existence once we had sufficient food in our stomach. And once we had enough to eat ourselves and help our families with it, people became greedy and took to crime!

If you just read all these in one go, you would realize that the evolution has been like this. Religion has always been an engagement – a thing of attachment. I’m a prolific blogger myself. I’m saying so because I spend a lot of time in a day working on blogs – reading, writing and commenting on others’ blogs. So, this engagement can be named religion for me. This is the way it should have been – and it is. Then, civilized people came up with different thoughts and gave birth to different religions. Every religion talks about a way of living a life. That’s all about it. Anything apart from this is either politics for personal benefits or it is mere greed and jealousy.

Well, religion has been the mainstay of any civilization. This is said only to justify the presence of a religion. We do not live for a religion – but we follow a religion so that we can live a better life. Ignorance is the demon of this age. In older days, saints and sages with universes of knowledge used to be the spiritual leaders and preachers of religions. Illiterate, ignorant people who have no other job left in life have taken over from them and have given religion a peculiar immoral look and all what they are doing here on the name of religion is only for their personal benefit. And another bunch of immoral fools who do not have spines of their own think themselves to be greatest followers of the crooked ones and start doing all kind of antisocial works. The culprits are no more than a handful, but the sad spiritless people comprise the mass of these sects all around the world.

Be it Taliban, Sri Ram Sena or Shiv Sena, they are being abused, misguided and maltreated by a handful of greedy outlaws, which should be eradicated just immediately. But, it does not seem to happen soon. The dubious governments still lick their feet. How sad! It was bad news today when Pakistani government surrendered to the scoundrels in the Siwan district – the Talibans! And the speech given by Karnataka’s CM about religion (and Sri Ram Sena) and the youths in India was even more eventful – ridiculous, to the point I could understand. It was clear submission to criminals and crime. How long will this continue? When will we kill the serpent in our sleeves or will we continue to feed it with milk?

I am writing this with a heavy heart. After knowing the Talibani rules and laws that has been imparted in Siwan anyone who is not insane would cry out aloud! Have you seen the news about the happenings in different part of India during Valentine’s Day? Even the saviors (the police) acted like fanatics. Where would we go? Where would a common man go? Whom do we think of when we are in trouble? The police? No, as the police are the troublemakers themselves. A few months ago, I was asking here, where we should go when we are being bombarded every time we go out of our homes. Now, it’s the same thing. Only difference is that earlier we were under threat from outsiders and now, we are being threatened by our own people. Who else we need to flee from? Where to hide to live a normal, sensuous life? There is not a place left – there ought to be one! 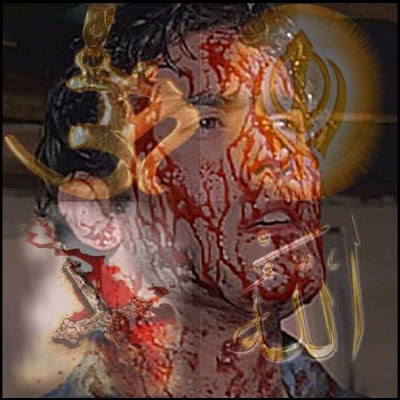 My question: Religion should set us free and lead us towards Moksha. If religion is this bad, that we need to hide from it, and we are being punished, then why should we follow it? Why should be a religion for that matter?

Si_Lee said…
hmmm... well we need to differentiate between a system and people who implement a system .. I have said this before i guess .. every religion is a system; a set of directives more so guidelines by which one should live his or her life...
It is not religion but lack of tolerance for other people following a different one; More importantly dearth of considering the fellow being an equal human that causes issues and to a greater extent leads to brutalities being committed on it's name ...
there is then a fine line ... I personally believe that since man cannot balance himself to be on the right side of the line he should not draw lines itself.. as in for example .. tushar feels strongly about preserving our culture and not letting it degrade or what he terms as degradation .. the difference is , I term it change.. Now we are both sane and hence give each other the space to follow what we believe and more so respect the perspective though we may not agree with each other ..
the world though is filled with people who want to impose their perceptions .. so really it's not about religion .. it's about culture also.. about traditions also, about regions also and i could go on...and on..
to illustrate ..
what is ram-sena opposing ? something which Islam forbids as well, apparently.
February 18, 2009 at 6:47 PM

Tan said…
You are too right Siddharth ... Tolerance and living along with people with varied thought process is the ask and we generally fail on that ...

Ram Sena may be doing something which is banned in Islam (I do not have much knowledge on that; but I will take your words as true) but the fact we need to understand is that these people are NOT DOING anything for the religion ... Its not because they care for Hinduism or Indianism, they are doing what they are only for their personal gains - they are the last people in the World to think about the religion ... Bunch of Ignorant, Illiterate and worthless nincompoops!!!
February 18, 2009 at 9:12 PM

Richa said…
No tan
I had agreed to ur each sentence in the post, but ur question is wrong.

religion doesnt teach us to kill, if u have read bhagwad gita, u'll know, each and every aspect of life- the questions, the problems have been provided solution for there in. in ramayana, there is an index- a matrix that forms dohas and tht helps u find solutions to ur problems.
religion is not wrong.
people are wrong, who make religion an excuse in the power game.
Jihad is struggle in the way of god. they have to preach islam in jihad, but they have made it an excuse.
ram sene people are wrong, they have made religion an excuse tht our culture doesnt permit it, but pour religion says , we have to respect women.
my point is, religion is not wrong, God is not bad. people have made it an ugly power game.
February 20, 2009 at 12:22 AM

Tan said…
Alisha,
I am sure you read the post; however, you did not understand my question, it seems ...

The Question was:
Religion should set us free and lead us towards Moksha. If religion is this bad, that we need to hide from it, and we are being punished, then why should we follow it? Why should be a religion for that matter?

The question was not asking the Religion as a whole - it was meant to be the religion that is preached by these Talibans and the Ram Sena et al. Not what is written in Gita or Bible, but what these fanatics are preaching!

The last part of the Question clearly mentions and emphasizes that God does not teach us to kill.

and, i just said that dude!! people are wrong..
it is all an ugly power game, unless they understand what religion actually preaches, they ll keep on killing their and our fellow men..
February 20, 2009 at 12:38 AM

Tan said…
Yes Richa ... You are right here ... Its just personal benefits and politics which is in turn ruining the faith and the attraction to a religion!

Kartz said…
Nice one there, Tan.

Well... Siddharth and I spoke about this once. It is clear misinterpretation of sacred text, for one thing. And the most important thing, to me, would be - tolerance. Period.

Tan said…
Thanks for liking it and sharing the same thought, Kartz...